We have been catching up with some of our referees and finding out about them and why refereeing rugby is appealing.
Our third in this series is Ben Van Berkel who is in his 2nd year of refereeing with the Wellington Referees. Ben took up refereeing in 2014 after suffering multiple shoulder injuries. 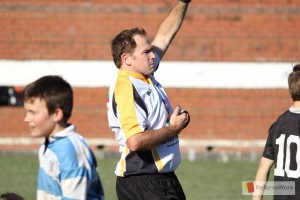 Did you play rugby?
Yes played for Western Suburbs Roosters as a hooker. I managed to get a few games for the Wellington Under 19s in 2005.

Are you involved in other sport?
Yes – have been involved with all sports including cricket, darts, table tennis, bowls, fishing, running, shot put, netball, and soccer.

What is the highest level you have refereed at?
Last year Under 15 College, and this year I have done women’s and lower end 1st XV rugby.

What is the best moment of your refereeing career?
Refereeing the Under 65kg College final between St Pats Town and St Pats Silverstream last year.

What is your funnest moment while refereeing?
Having no idea of the correct refereeing signals during my first game – just made them up as I went

What goals do you have for refereeing?
Would like to become a premier referee within 5 years

What advice do you have for someone considering refereeing?
Give it a go, its not as scary or hard as you think.

What advice do you have for someone that has just started refereeing?
Don’t worry so much about learning all the rules, simply make sure you have fun. The rules can be learnt as you go. Make sure you control the game as opposed to just participating in it

What do you want to achieve from a game of rugby that you are refereeing?
I want as little to do with the result as possible. If I can help players enjoy the game by keeping them within the rules, I have done my job as a ref.

What other things about refereeing do you enjoy?
Wellington Rugby Referees Association look after you very well. You are given all the tools and teaching required to become a good referee. The refereeing community is very enjoyable and very social. Its a great way to stay involved in the game, your body doesn’t take the punishment you get playing the game and most importantly, it’s a lot of fun.