We have been catching up with some of referees and finding out about them and why refereeing rugby is appealing.
Our second in this series is Richard Gordon who is in his 9th year of refereeing with the Wellington Referees after starting while still at Scots College. He is the youngest referee to have refereed Premier rugby in Wellington at 19 and is currently in the New Zealand Rugby National Development Panel after been on the New Zealand Rugby Wider training panel in 2014. 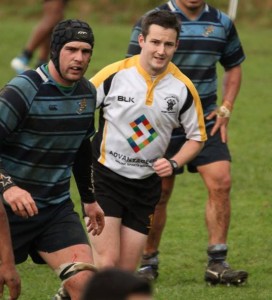 When did you start refereeing?
2007 while playing rugby at Scots College

Did you play rugby?
I played 1st XV for Scots College and been known to play the odd game for Wests Under 85kg. My preferred position was/is fullback.

Are you involved in other sport?
I play football for the Wellington Olympic Turf Monsters, current Division 12 Champions of Wellington.

Why did you get involved in Rugby Refereeing?
I busted my shoulder seriously playing rugby at college, and refereeing seemed like the next best option. The last 9 years have certainly shown to me that I made the right choice.

What is the highest level you have refereed at?
Club Premier and Representative B and U21s. I have refereed 58 premier games of club rugby in Wellington and five other provincial premier club fixtures.

What is your funnest moment while refereeing?
I actually got concussed by a terrible box kick by Peter Sciascia in the first 5 minutes of a Premier game (unfortunately captured on video). I carried on, but don’t remember the rest of the game at all. Ross Bond reckons that I actually reffed quite well, and maybe he should kick a ball at my head before all Marist St Pats games..

What goals do you have for refereeing?
I would love to be an international referee. The pathways are there for everyone and although it would take a huge amount of hard work and dedication, it’s certainly possible.

What advice do you have for someone considering refereeing?
Just give it a go – you can referee whenever or wherever you want. Rugby can’t happen without referees, and having the best seat in the house is quite enjoyable. The perks (especially interchange) definitely outweigh the minute amounts of unneeded advice we receive.

What advice do you have for someone that has just started refereeing?
Keep it simple and enjoy yourself.

Other articles of interest about Richard: